Anna Lavin came with her family from Russia to Philadelphia in 1896 aboard the S.S. Penland. Growing up in a poor neighborhood in South Philadelphia where death and disease were common, she lost two of her brothers to Scarlet Fever and her mother to malnutrition.  Starting work at the age of 12, Lavin spent for 53 years in the garment industry, and enjoyed a life in which she always "had enough." 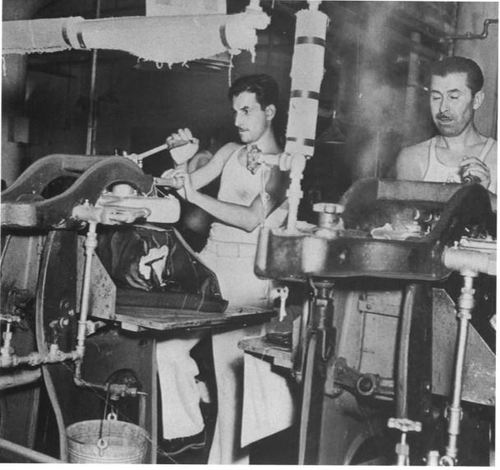 Sam Brosilow (1898-1983) was three when he came from Russia with his parents to Philadelphia.  He began working in the men’s garment industry at the age of 14 and remained a cutter throughout his career. Radical in his beliefs about workers' rights, he supported the unionization of the Philadelphia clothing industry and was an active member of the Amalgamated Clothing Workers of America. Tough and cantankerous, Brosilow stood up to anyone, regardless of their position.