A Search for Self 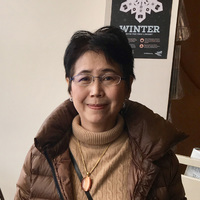 Born to Chinese parents in Ben Tre, Vietnam in 1965, Mingchu Pearl Huynh grew up during the worst years of the Vietnam War.

“My childhood was pretty happy, even though the fighting was going on. In the morning, when I went to school, walking on the country road, I could see far away in the mountain, bombing; flashes of fire on the mountain…. Every day we would prepare a bag of food and clothing so we were ready to run at any time.” – Mingchu Pearl Huynh, 2019

To make sense of a world in turmoil, Huynh turned to Buddhism, the dominant religion of Vietnam.

“Learning about Buddhism has changed my life. It has given meaning to my life, of service to other people." – Mingchu Pearl Huynh, 2019

At a young age, Pearl began a small business to contribute financially to her family.

“I made the appliqué; the things people put on their clothes when they had a hole…. My parents told me whatever I make could support a family of ten people, so pretty decent [chuckles]…. Because I was so young, I was bullied by the people on the night market, but I am strong, I got by.” – Mingchu Pearl Huynh, 2019

After the final American withdrawal from Vietnam in 1975, the Communist government began a purge against those who had supported the United States during the conflict, including Vietnam's ethnic Chinese.

"In 1979, Vietnam was starting to get rid of the Chinese because of the conflict. The Vietnamese government confiscated my parents' merchandise. They would allow us to leave the country, given the condition we pay gold. My parents have ten children and there wasn’t enough to pay for all of us."  – Mingchu Pearl Huynh, 2019 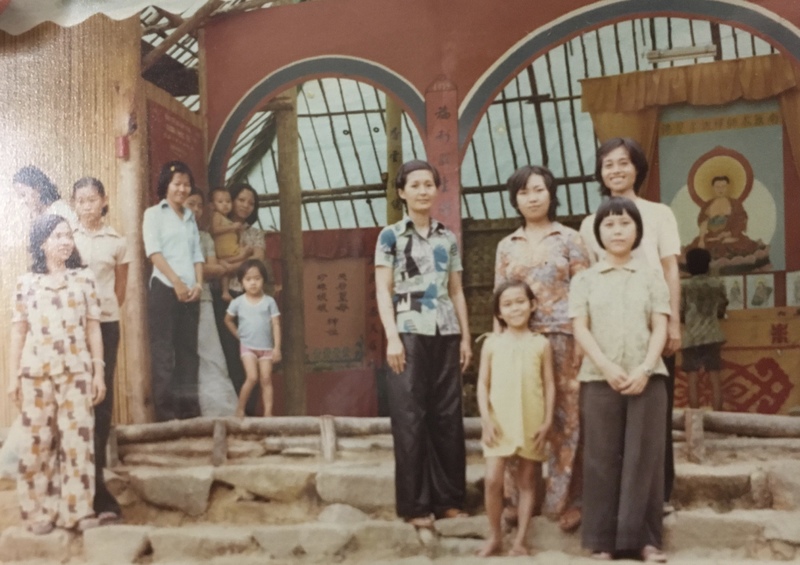 Unable to scrounge up enough gold to pay for all of their children to escape Vietnam, Huynh's parents left Pearl behind. After running away in the middle of the night and paying a bribe at a port, Huynh joined the tens of thousands of Vietnamese boat people who fled to a refugee camp on Kuku Island, in the Anambas Islands of Indonesia. Less than a year later, at age fourteen, she was sponsored by an older sister to come to the United States.

"I came to America with three pieces of clothing, twenty dollars, and a gold chain that my mother gave me.... For me, and many immigrants-- My parents are from China, and I was born in Vietnam, and the Vietnamese government never think of us as one of them, and then we come to this country. I benefit from this country. I get educated, the government clothe me and feed me, and that is a big favor; more than any government gave me." – Mingchu Pearl Huynh,  2019

Soon after reunification with her family in Philadelphia, Pearl ran away to a Buddhist monastery in New York. Under the guidance of her Buddhist Master, Pearl then moved to California. After graduating from high school, she returned to the monastery, which put her through college. To distance herself from a spiritual life, Pearl then moved out of the monastery and into an apartment with a boyfriend. After three years, their relationship dissolved. 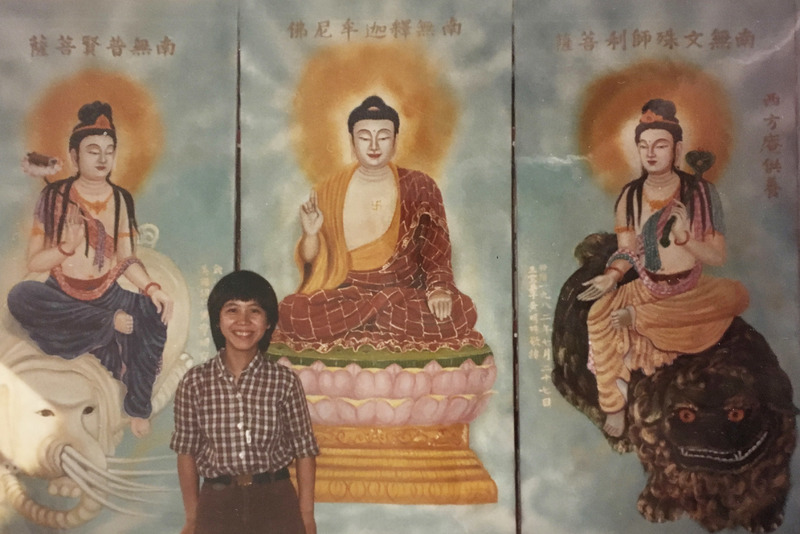 Pearl posing with artwork she painted of the Buddha and Bodhisattvas displayed in the American Buddhist Confederation Temple in New York City. c. 1982 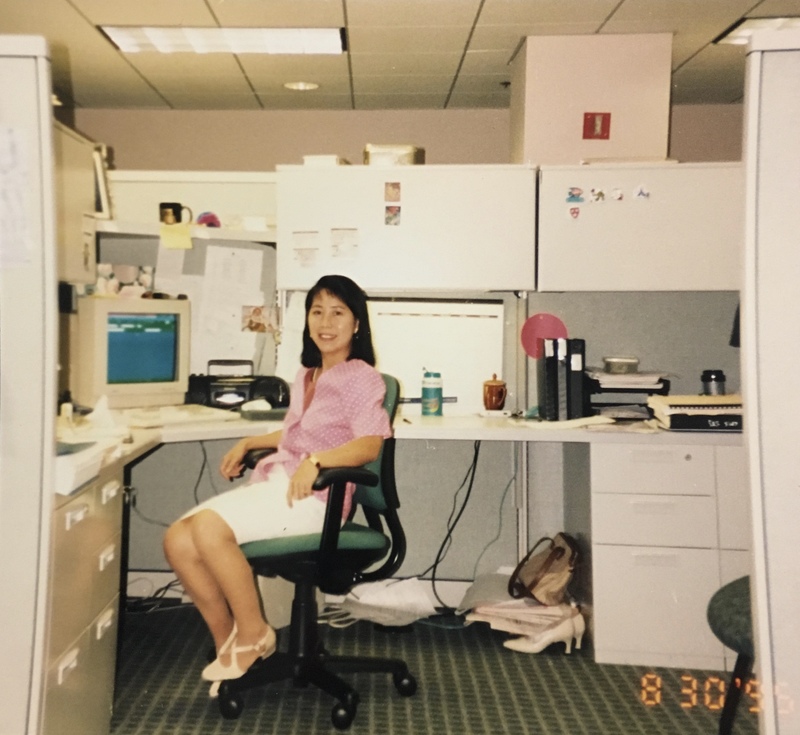 Huynh in her office at Chase Bank in New York, where she worked as a programmer. c. 1995

"I went back to become single. I’m dating, partying, living a normal life. I experienced life like a person who grew up in a monastery and is now going out into the world. Many things are a new learning experience." – Mingchu Pearl Huynh, 2019

Pearl earned a bachelor's degree in business administration and a master's degree in science. She then became a software consultant for New York banks. After meeting the Dalai Lama in September 1996, she returned to her life of service. Along with her rediscovered passion, and her growing thoughts about the end of the world (in 2000 and 2012), Huynh reconnected with her family in Philadelphia. 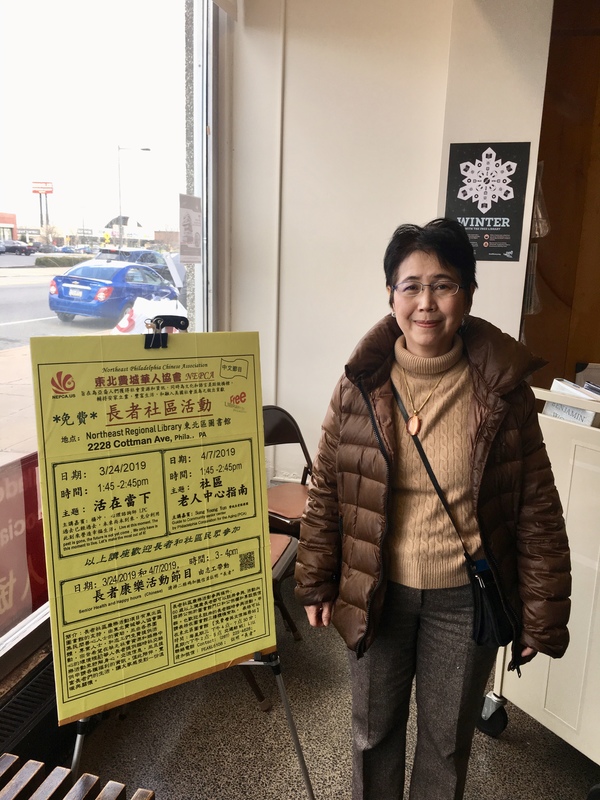 Settling into the "slower" pace of Philadelphia, Pearl diverged on many paths, flipping houses and working as a Chinese interpreter. She also began working with Pennsylvania State Representative Jared Solomon. Together, they in 2018 established the Northeast Philadelphia Chinese Association (NEPCA), to assist the area's growing Chinese population. Here, Huynh aims to share the lessons she has learned and to ease the transition for fellow immigrants to Philadelphia.

"I come here with nothing.... I was a teenager and I get an education, a job, a good life. I build up all of it myself, and it's not given to me by my parents or something. I have the opportunity and I went out and helped my community, so I really get my American dream.” – Mingchu Pearl Huynh, 2019

Mingchu Pearl Huynh Photo Gallery →
A Search for Self