"I am not afraid of anything" 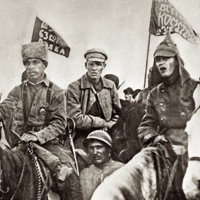 Born in 1905 in the Ukraine, Max Tannenbaum was 7 when his father immigrated to the United States. In his teens, Tannenbaum worked to support his mother and three younger brothers, teaching Hebrew and traveling to neighboring towns with his brother to find work.

“He says ‘Oh, your brother is too young and you’re a little older, but it’s not a job for Jews.’ I tell him, before I says to him, ‘You want me to show my strength?’ There was laying a big log, about that big here, and what, 50-feet long, and I go to the end, and I put my hand on it like this, and I pick up and I stare at him you see that, and he says, ‘That’s impossible.’ So, he says, ‘Alright you. I’ll give you a chance. You go out, you pull this off, the irons in the post…a big iron chain, pull it.’ 'And my brother,' I say, ‘Can you find a job for him?’ He says ‘Yes, when we make the dam outside… You have him knock the little sticks on the grass there.’ And that was his job… That went on for a couple of weeks here. And every time he used to come on Friday… and he used to bring 10 rubles for the both of us.”  - Max Tannenbaum, 1982

In their free time, Max and his brother found ways to make for additional income.

During World War I, Tannenbaum did odd jobs for the German soldiers stationed in his village.

“When the Germans came in they could not understand the Ukraine’s language…and they wanted to teach the peasants to make better food… I could speak German…I took a dictionary and I started to learn…So there was one secret police officer from the Germans…He finds out I speak German, too, and he says to me, ‘I got a job for you… You going to drive the horses. You know the territory, and we will dress you in any clothes we can get.’…  I remember one time, one of the secret police wanted… to go to furlough to Germany. He wanted to buy some butter and cheese to take with him, but he says, ‘I don’t have no money.’ …And I say to him ‘How about I got something for you. What I can do to for you.’… He used to be the man to protect me when going to the trenches…I used to go into the city and buy all the things I could get… He was my partner. He says, 'We split 50/50, whatever we make.’ We really divided the money, 50/50, the profit.” – Max Tannenbaum, 1982 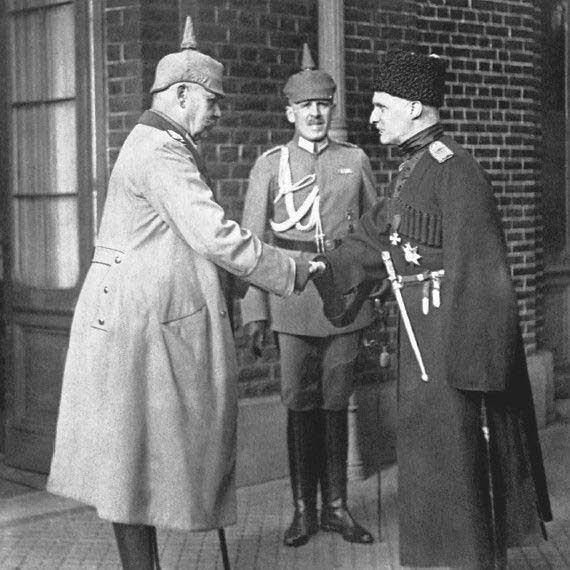 German field marshal Paul von Hindenburg (left) shakes hands with Ukraine general Pavlo Skoropadsky. The German Army had a cordial relationship with Ukrainian citizens and its army in the early years of WWI.

Tannenbaum was making good money working with the Germans, but the Russian Revolution brought chaos to his village.

“When I was in the Ukraine at that time during the Revolution... And I find out there was 10 different armies fighting each other…The Bolsheviks was the only one that had the Jewish German general and he was the main general of the Russian Red Army…every week he comes over there on the platform and talks to the peasants…And he says… ‘You come here and join the army.’” – Max Tannenbaum, 1982

Fearing for his life after he was forced to serve in the Russian army, Tannenbaum decided to flee.

“My father used to send me a letter, and he used to tell me that, this country, United States, he says to me… 'This is the land of gold, but you have to work for it.' And it’s not like the forced labor like the Germans and the Russians… And I made up my mind that my purpose in life was to get to the United States. But I had mother and three little brothers who I left there. And I was taken in the army…The Polish army that time was fighting the Germans. That was after the war finished already…I remember the officer gave orders, he says ‘Each body save yourself for yourself! I can do nothing for you!’ So, I remember I jumped off the horse…It didn’t stop me from running away. I had it in my mind, I must come here.” – Max Tannenbaum, 1982

Fleeing to Poland, Tannenbaum went to the American consulate in Warsaw.

“I find out my father was a citizen as soon as he came here; about 5 years he became a citizen…He got sick and could work no more… So, he got himself a pushcart selling on Marshall Street right in Philadelphia… selling potatoes and oranges and apples, and he was making a nice living. So, I send a letter to my father in Warsaw, when I came in, and I find out where the… American consulate in Warsaw, because that was the only country nearest I could connect to wait to talk to my father. They told me the counselor, he says, ‘I was looking for you. Your father is asking all the time about you.’ 'And is it possible to become a citizen?' I was already 19 years old.” – Max Tannenbaum, 1982 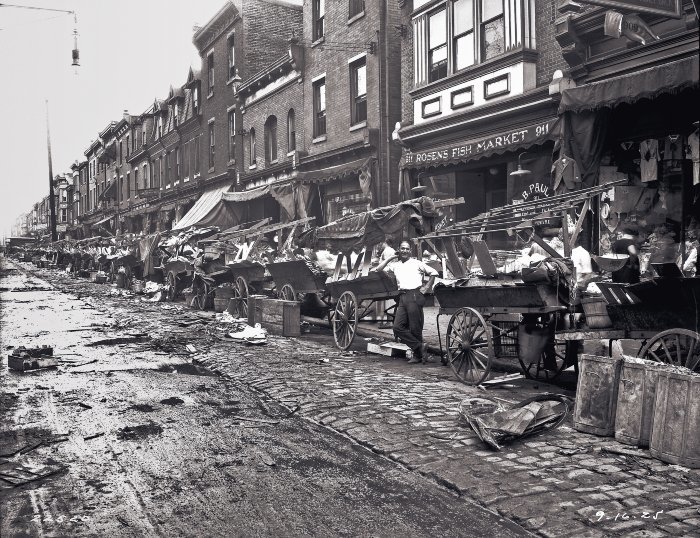 Once in Philadelphia, Tannenbaum worked at a suspender factory on 7th and Arch Street by day while attending evening classes.

“I was going every night to night school and learning English….I started to work on making suspenders…I got the job by some relative of my father…And he was the foreman of that job…It was on 7th and Arch—it was working a lot of Polish people…The only Jew was the foreman…I worked more than they did…They made about $25 a week… I says, ‘Why don’t you let me go in the piecework? I do better work than they do.’ My cousin there says ‘I talk it over with the boss’…. So I started to work there…. I became very good, I used to make $50 a week. I used to come home and tell my father ‘I’m making 50 a week.' And he says, ‘I am not satisfied.’ I had a boyfriend that came from Austria, a Jewish fellow, and they were upholsters, making furniture…They got a union job there… So, I says ‘How do I get in and become a line man?’… I decided I would get into that union, but it was hard to get in… At that time the union went up on a general strike.” – Max Tannenbaum, 1982 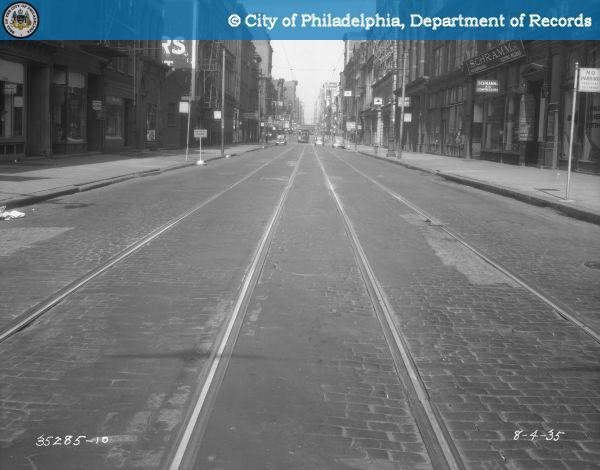 In 1936, Tannenbaum participated in the garment industry strikes that rocked the nation during the Great Depression. His involvement in the general strike led to trouble.

“So during that time they had this strike there and I became very involved. I went in to one union meeting…and they saw me, I was fighting the front line there…When I came in there I became secretary of treasury of the union. And I told them 'I don’t want any money. I will just be a dollar-a-year man.' I says, ‘I don’t need your money because I will be working and making enough.’… There was this one guy…on 4th and Girard Avenue…. Baker’s Publishing Company … and this Baker never had a union…. We went out on the picket line and we started giving them trouble. So, he decided he was going to get me for this. He made up a story of something I did not do. And he told the magistrate when I got arrested that I am the one leading the revolution and says, ‘That guy is a Red. He belongs to the Red army, not here.’ And I told the magistrate, right there, I says ‘I’m a United States citizen and even my father is in the United States and my brothers. We all are citizens and we fight for this country.’ But that didn’t stop him from arresting me.” – Max Tannenbaum, 1982

During the Great Depression, Tannenbaum discovered a new purpose for himself.

“When I worked over there I find out that is not enough for me… I was not married yet and I says ‘When I start something the main thing in my mind is my next generation.’…They let me out there, the magistrate… So I decided I am going to try to make an upholstery business for myself… So I moved to an apartment here in Northeast Philadelphia and it was a butcher shop. The women come with carriages and they carry babies… I see that the carriages are all torn down and everything else. I put out a sign ‘I’ll make carriages $6 a piece covered in new material make it brand new.’… I decided another thing, that upholstery is not enough for me, so I bought this place… It was an old grocery store, on Wyoming Avenue. It was a grocery store, an old dilapidated building…I brought in ten thousand dollars in my pocket cash, and I says, ‘Here it is. You take it, or you leave it.’ So that woman fainted. She lived there so many years and all a sudden, she was bargaining for a price and yeah, I gave her more than she wanted. About five hundred dollars more. I says, ‘But I want you to get out of here fast enough because I want to start to rebuild it.’ And I did rebuild that place.” – Max Tannenbaum, 1982

Tannenbaum built up a successful upholstery business. As he and his wife grew older, the neighborhood deteriorated, and he decided to sell the business.

“My wife, she was always afraid [for] me, that something was going to happen to me because there was a break-in almost every night…The one time I was threatened with a gun, and I figured that’s enough. I am going to sell out everything right now. Not even half the price of what it is worth…My wife, she was an invalid, and I had to go all around Pennsylvania state looking any place to go in." – Max Tannenbaum, 1982

It was near his wife's nursing home that he discovered a synagogue and began practicing his religion again.

“So when I came here I find out about this place here. It’s only 5 blocks—I see the synagogue there and I see no one is praying… And I see a library there. There’s books, Jewish books… But there were no people praying… So I says ‘I’ll take a chance.’ I came in here, the first thing I did… Kushner gave me himself a thing that I’m capable to be…because I know so much in Hebrew and I got the courage to stand up at the pulpit... All the people I take in, I don’t take in by force… I says, ‘This is going to be something you learn, even if you don’t understand, I will teach you.’ …And that’s where I go… Whatever I start, everything goes right, and I am not afraid of anything.” – Max Tannenbaum, 1982

"I am not afraid of anything"