In 1983, Charles Hardy III produced I Remember When: Times Gone But Not Forgotten for WHYY-FM in Philadelphia. In one of the episodes Hardy shared elderly Philadelphians' memories of the global influenza pandemic that devastated the city in the fall of 1918. 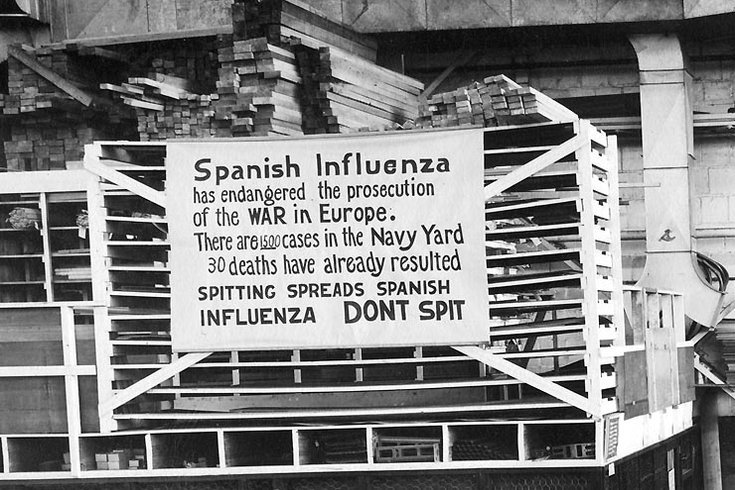 "Influenza came in November, 1918...You know, I caught the flu. People were dying like flies. I just didn't make it home. When I got home, I was so sick. I was living on 31st St. I went in and [   ] said, "What are you doing here?" I said, "I got the flu." She said, "Well, you better go up and go to bed." I went upstairs and when the doctor was over he told me to keep taking that. He told my wife and my father. My father had to get some whisky. I would take a tablespoon full of whisky and about twice as much water every two hours. That was his main remedy. He says, "People don't die from influenza but they die from pneumonia if it comes on you after. This will keep the pneumonia off of you." – Clifford Adams

In September of 1918, the "war to end all wars" was finally coming to a close.  With news from the front and celebrity appearances at the latest Liberty Loan drives riveting public attention, a small notice from the Surgeon General's office warning of the arrival of influenza was easy to overlook. The first case appeared on September 11, in the Philadelphia Navy Yard. By October 1, the flu had exploded throughout the city. By October 12th, 2,600 were dead and the death rate still rising. Though the flu spared no group, it hit the crowded immigrant neighborhoods the hardest. That fall, Mildred Kleeman gave birth to her first child. 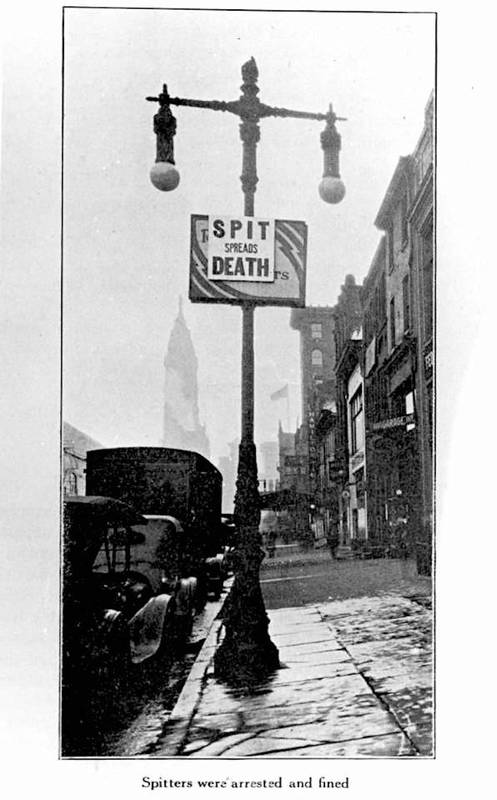 "Yes, my oldest son was born just right there. It was awful. In 1918. It was awful. It was so bad. I remember looking out of the windows. I saw they were just putting coffins right on top of one another. And they were taking them out that way. It was really terrible. And my doctor came down. I was in labor for forty-eight hours and there were all push carts on 7th Street, all push carts there. And I lived on the third floor. I had a lovely apartment there and he slept in that car. He came up every fifteen minutes, when I got into labor, and he says, "Oh." And he saw this and saw that. And my mother saw them taking out one woman with two babies that were just born. It was a tragedy. I never want to see anything like that again...There was nothing they could do for them. Nothing." – Mildred Kleeman, 1982

Some of the worst horror stories circulating around the epidemic had to do with the high mortality rate of pregnant women. One of the oddities about the 1918 Spanish Influenza was the types of people it struck. Usually the very young and very old suffer the greatest mortality rates from the flu. But this time, the groups hardest hit were young men and women between their late teens and early thirties, including Anna Van Dyke, then fourteen, who remembered vividly the pandemic's hold on the city. 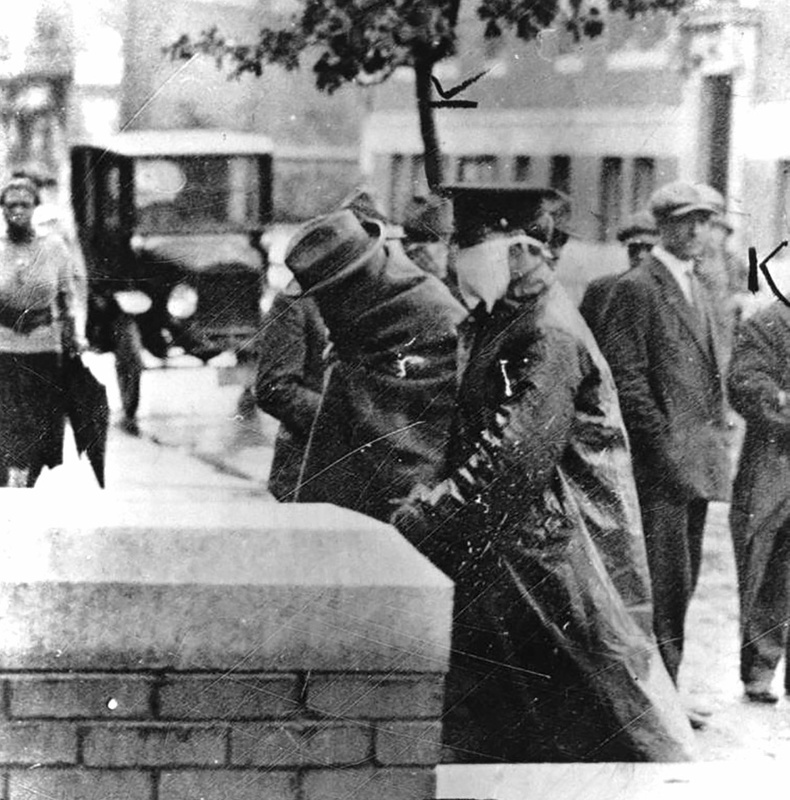 "My whole family had it except my mother. My father, he had it. And the doctor said, "I can't come every day." He said that I was going to die. I had a bad heart because I had had rheumatic fever. He said I was going to die. When I died, they should go over and get a death certificate and that would be all right, you know? But I didn't die. And my mother had made good wine out of oranges and lemons and all kind of fruit and every once in a while my father would put a blanket around him and get a hatchet and he'd go, "Whoo, whoo, whoo!" You know, he was an Indian. He would go down stairs. All of us were sick. We couldn't go down and see, so he'd come up and get in bed and a little while afterwards, he'd come up and do it again...The doctor would come...He'd say, like he did to my mother, "When she dies, come on over and I'll give you the death certificate." But the people, they'd have an undertaker but they'd leave them there so long that they'd say, "Well we can't dress them. We don't have the time." So somebody would dress them and wash them and clean them up and shave them." – Anna Van Dyke, 1982 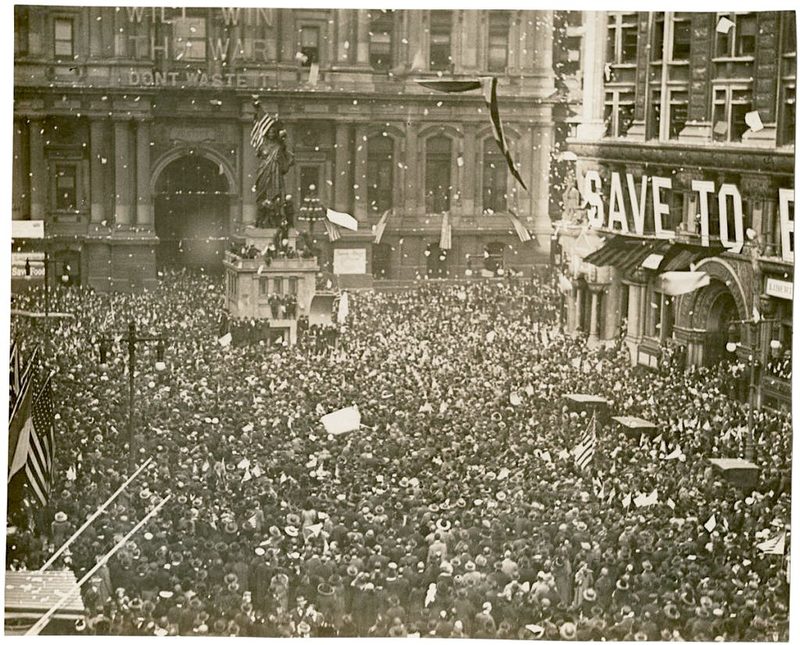 Before antibiotics and vaccines, influenza was a deadly disease. One reason the 1918 pandemic was so devastating was that the flu virus was complicated by a bacterial infection which led to pneumonia and pleurisy. At military bases, doctors had the equipment to keep many soldiers alive by inserting tubes between their ribs to drain off the accumulating fluid. For most people, however, there was little that could be done. So they died or pulled through as best they could.

"Whoever was well would go and take care of them. Like my mother went and she laid out people. She'd shave the men and lay them out. She'd put their clothes on and have them in the casket and everything... And they would have a big box, made like a casket... The coffin was like this table with a lid. They would put that ice, with what looked like big dish pans and they'd put it over the body so that it would keep, to be laid out." – Elizabeth Strupczewski, 1982 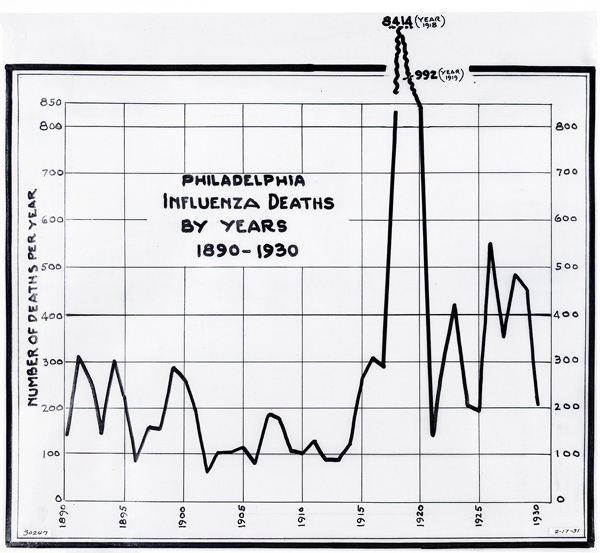 This graph of the Philadelphia Influenza deaths between 1890 and 1930 highlights the spike in deaths during the 1918 pandemic.

The early weeks of October were the worst; 754 people were reported dead on October 16th alone. As the bodies piled up, the next phase of the crisis grew as coffins ran out and undertakers were overwhelmed with work. Now new horror stories began to spread about bodies piling up in back rooms. At the City Coroner's office at 13th and Wood, which only had space for thirty-six corpses, hundreds were piling up four deep in the halls.

"Well, they closed all the saloons. They stopped you from communicating, from coming to churches and different things. They closed the schools and everything. Everything was quiet and gradually after so many died and was buried and stacked up out to be buried, and people got over it. Then you would read that it struck Idaho or someplace, going on up in the Northwest. Then it went away." – Clifford Adams, 1982

In Philadelphia the pandemic peaked on October 16th and then began to leave the city. On the 27th, the City lifted the ban on church services. On the 28th, the schools reopened. Though it continued on into the winter months, the worst was over. Between September 29th and November 2nd, 12,162 people died in Philadelphia of the flu or related pneumonia. This figure does not include those who died of other causes brought on by the flu.

And then it was forgotten. The pandemic passed so quickly that it left little lasting impact on the economics or psychology of the city or the nation. In the public memory it became just a footnote to the Great War. Those who survived it, however, held onto their memories of the great influenza pandemic of 1918 and the loved ones that they lost.

"I have something in mind I'll never forget though. In 1918 they had a disease that broke here in Philadelphia, influenza. Remember? Right? Now I was the only one well in the family. My brother was laid up with it, my sister was laid up with it, my father and my mother. Just me and my aunt, we took care of the four of them. So one time my mother was off so bad, you know, so my aunt says, "Go call Dr. Pensa." That was on 19th and Federal. So me, I ran over to Federal St. I was about 11-12-years old then. I went over to 9th and Federal, I said, "Dr. Will you come over?" He says, "All right, I'll be over soon." I says, "All right." So I went home and I said, "He'll be right over." My aunt said, "Go call Dr. Momerraro at 9th and Catherine." I go over and call Dr. Momerraro. So these two doctors, they met. In the meantime, I went and called Dr. DeFeo on 11th and Carpenter. In the meantime, the three doctors met all at one time. They all met. They knew each other, the doctors, you know. They start talking and the two doctors ran off into the kitchen and I followed over, you know and I could hear them talking. He says, "That little boy looks like he's got a bad case." Oh, he looked terrible. My kid brother looked terrible then. He was about seven years old. So I started to cry and I walked away. Then I went over to my aunt. I says, "I heard Dr. Momerraro and Dr. DeFeo talking about Rocky, my brother." She pacified me by saying, "Oh, he'll be all right." We had an out house and my aunt started to cry. She didn't want me to see her crying." – Anthony Lombardo, 1982