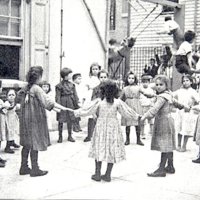 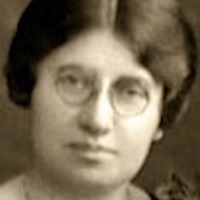 Bertha (Sanford) Gruenberg was born in Vienna, Austria in 1888 to a Jewish family. In 1893 her parents, Yankle James Sanford and Jettie Zisman-Sanford, moved with Bertha and her three siblings to Minneapolis, Minnesota.

"From Vienna, Austria. We came over first class. My mother, who was an agnostic and a women's libber even then, refused to stay in Europe to bring up her children in an anti-Semitic atmosphere ... and we ended up in Minneapolis on the coldest February 12th you ever can ever remember." – Bertha Gruenberg, 1982

In 1909, Bertha married Frederick P. Gruenberg. A year later, the couple moved to Philadelphia for his job as a foreign relations expert with the venerable Brown Brothers & Company. There, they quickly witnessed the parochialism of well-to-do Philadelphians.

"When I came to Philadelphia in 1910, the most frequent question that people put to me was 'Who was your grandfather?' And when you said 'You wouldn't know my grandfather,' 'Well, who was your father?' 'Well,' I said, 'You wouldn't know my father either because I was brought up in Minneapolis, Minnesota.' And a Bryn Mawr graduate said to me, 'Minneapolis, the twin city of Buffalo?' Philadelphia was so insular, they couldn't see anything beyond this city, and it was still coasting along on the glory of having once been the capital of the United States." – Bertha Gruenberg, 1982

Wealthy Philadelphians, Gruenberg remembered, constantly asked her what private schools she planned to send her children to and where they intended to buy a house. To Bertha, well-to-do Philadelphians only cared about the names of the schools, restaurants, and functions that a person and their children attended. 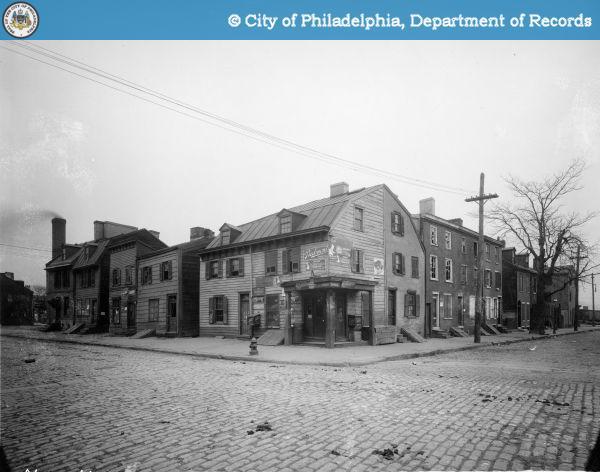 Southwark House, 1915, where the Gruenbergs lived and worked at  soon after they arrived in Philadelphia in 1910.

The Gruenbergs, however, had no desire to live in a big house and socialize with the city's elites. Instead, in 1910 they moved into the Southwark Settlement House, at Ellsworth and Front Streets, which provided educational, recreational, and social services to immigrants. There, Bertha worked as assistant to the head worker of the settlement and taught adult immigrants how to read and write. Here, too, she learned about the lives and culture of Philadelphia's inner city poor.

"In Southwark House there were third and fourth generation of Irish who had become so degenerate that when the First World War broke out those boys could not read or write. And we used to tutor them A, B, C in order to qualify them for going into the Army.… Now, the proper people never bothered with that area, never bothered with them at all."
– Bertha Gruenberg, 1982

From 1911 to 1913, the Gruenbergs lived at the Philadelphia College Settlement, where Bertha took charge of adult immigration education.

"The College Settlement had two sections, one on Lombard Street, which was Irish, and one on Christian Street, which was mostly Jewish. And the people out of Lombard Street had never been in Center City Philadelphia in all their lives … They had never seen City Hall! They had never seen anything. I just couldn’t get over it. As a Midwesterner I just couldn’t get over it because, of course, part of it was my European background, so that the world was my oyster." – Bertha Gruenberg, 1982

In Philadelphia the Gruenbergs also dealt with religious ignorance and anti-Semitism. In her 1982 interview, Gruenberg shared a story about moving into a new home and meeting an elderly couple in the house next door.

"And we said, 'Mrs. Mason, we want to tell you that we're Jews.' She looked at me and she said, 'What's that?' 'Well,' I said, 'It's just—Did you ever hear of Christ? He was a Jew.' Didn't register at all. Well she says, 'You know, if you don't talk religion I guess it'll be all right.' And every Sunday when she hitched up the horse and buggy she invited us to go to church with her. It didn't register." – Bertha Gruenberg, 1982 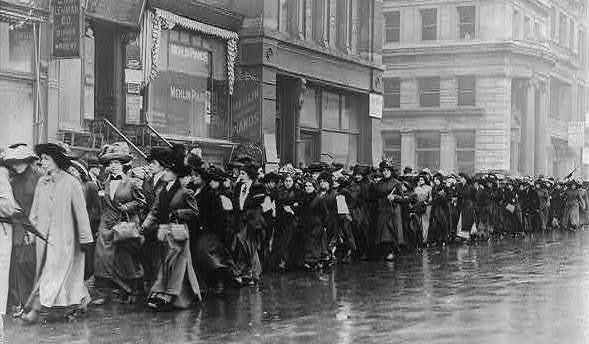 Suffragists parading, April 5, 1917. Gruenberg participated in women's rights parades like this one.

Before moving to Philadephia, Bertha had worked as a reporter in Minneapolis, where she wrote the first Shopper Girl column in the nation. Her parents, especially her mother, had brought Bertha up in a very progressive way. In Philadelphia, Gruenberg became active in the women's rights movement, walking with her husband in a women's suffrage parade in 1912 and becoming an early advocate for a woman's right to birth control. 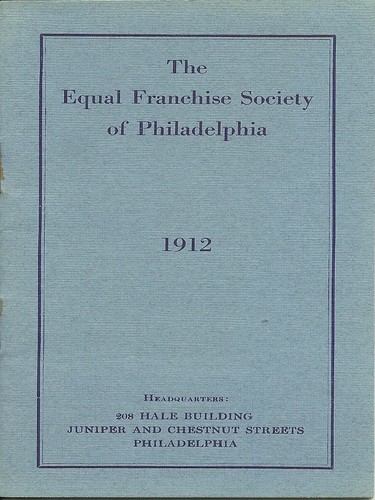 From 1917 to 1920, Gruenberg served as the Executive Secretary of the Equal Franchise Society of Philadelphia, an organization committed to passing an amendment to the Pennsylvania state constitution granting women the right to vote.

"I helped stage the first birth control meeting in Philadelphia in 1916 … So I belonged to an organization called— it was just handful of women, I don’t think we had more than twenty women, twenty members... The Women’s Birth Control League…. Couldn’t find a place to meet. No school, no synagogue, no church, no public hall, nobody! I get a telephone call from an organization called the New Century Club, it was on 12th and Walnut—has since been raised—and the woman called up and she said 'I hear you’re having a very hard time to find a place to meet, would you like to meet at our house?' 'Oh,' I said 'I can’t imagine such good luck.' It was a comparatively small place. We staged the meeting. It was so jammed that we had as many people outside as inside, and when the speaker was finished she had to go outside to speak because before the day of the microphone—can you imagine such a time?—and the speaker was Margaret Sanger. Then, they changed the name to Planned Parenthood, and I was very angry." – Bertha Gruenberg, 1982 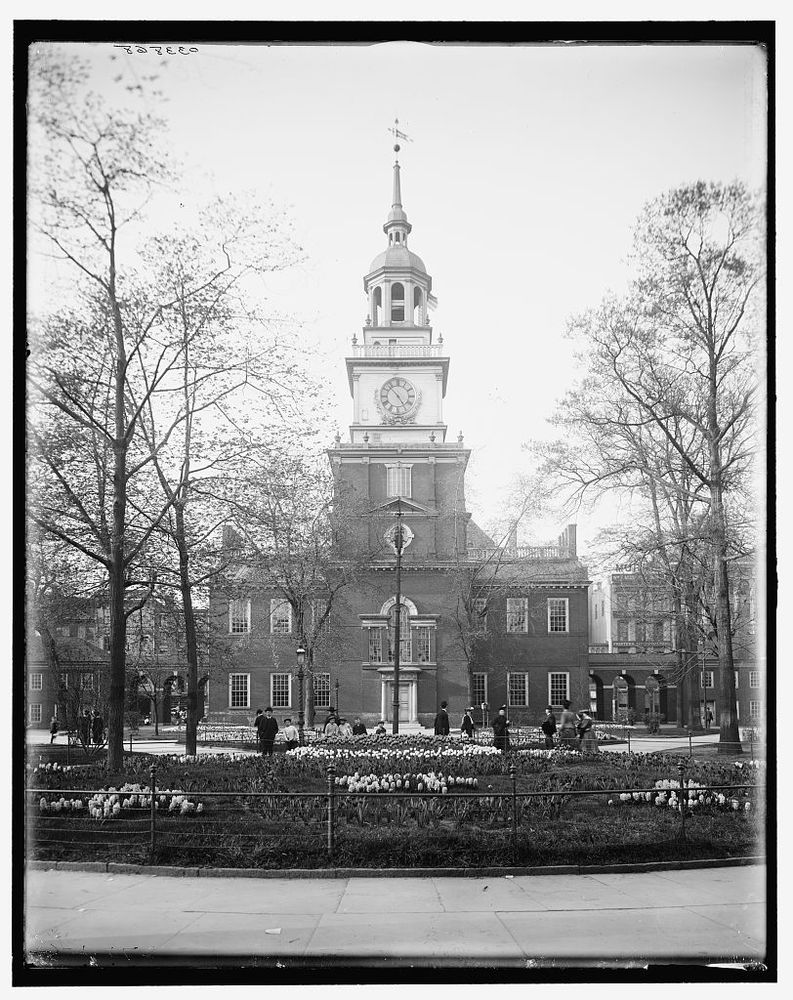 As an outsider, Bertha Gruenberg saw both rich and poor Philadelphians differently than most people. She believed Philadelphians had insularity when it came to small things, such as the names of places a person attended as well as big things, including one's religion. The Gruenbergs found a place for themselves in their new home of Philadelphia. Fred became an important civic leader and remained active in progressive causes. They also grew to love many things about Philadelphia and enjoyed the city until the day they passed.