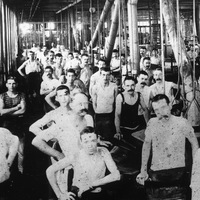 “You know when I hear the national anthem over here, I get malincon. It hits me. I love this country, you understand? America is America! I don’t think there’s a place in the world like this country!” – Antony Catalano, 1982

Antony Catalano was born June 28, 1910 in Philadelphia, Pennsylvania, soon after his parents, Angelo and Catherine Catalano, emigrated from Sicily to provide a better life for their children. Once in Philadelphia, Angelo found a job as an apprentice at the John B. Stetson Company making $4 a week. The Catalanos, like thousands of other Italian immigrants, settled in South Philadelphia. 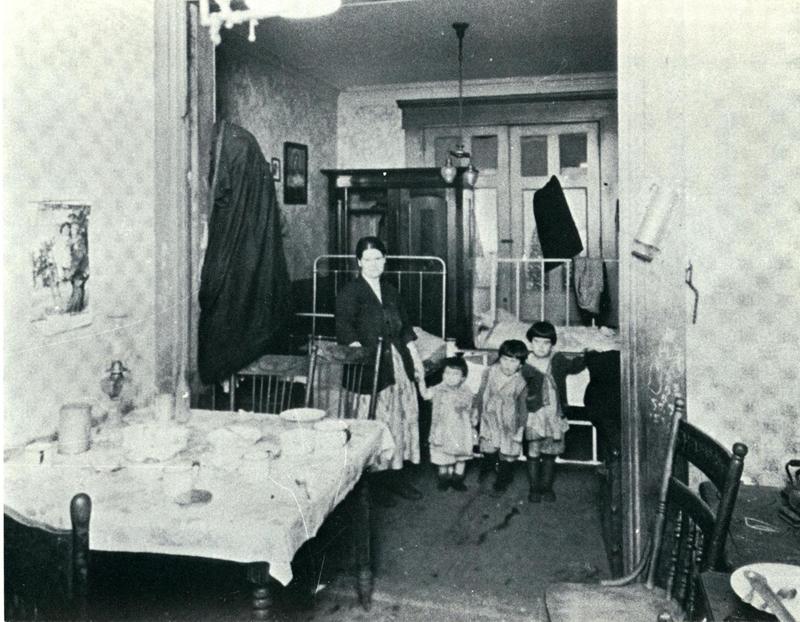 "Young family living conditions," Philadelphia Housing Association, 1912. When the Catalanos arrived in the U.S., they lived in small apartment similar to this one.

When Angelo got his job at Stetson in 1910, the company was aready known as one of the best employers in the city. Stetson provided its employees steady wages, annual bonuses, holiday turkeys, and a range of social services, including Americanization classes, a building & loan association, hospital, and Sunday school classes. 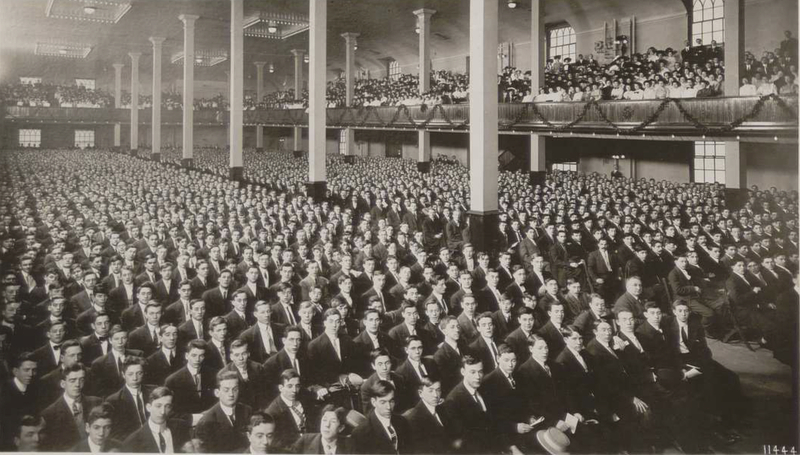 John B. Stetson Hat Company, "Christmas Meeting of Stetson Employees," c. 1925. In the 1910s and 1920s Stetson distribued gifts and awards to its employees at its annual Christmas celebration.

“They had all the facilities.... It was so clean... it wasn’t a sweatshop. You know what I mean? It was really—they were a good company to work for. You couldn’t find a better one. And you know I heard from Dad many a times that John B. Stetson, he was really a human being. He took care of all of the employees. And people had got bonuses at the end of the year. They got turkeys…. Not only that, my daddy, when he came from Europe, they had a school, and my daddy learned how to get his citizen papers from John B. Stetson.” – Antony Catalano, 1982

Like other immigrant families, the Catalanos expected Antony to go to work as soon as he could. His mother, however, did not want him to follow his father’s footsteps into the hat business. So at the age of twelve, Antony found work as an apprentice, after school, at a local barbershop. Catalano didn't earn as much money as a barber as he would have in the hat business, so when he was 16, he quit school to work at Stetsons. 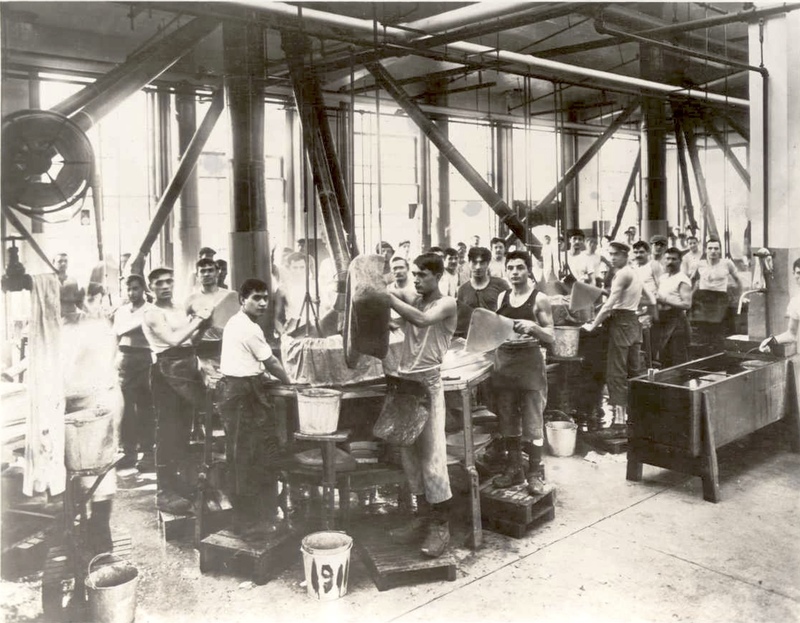 Stetson Hat Company Sizing Department, circa 1918. In the early 1900s most workers in the Stetson factory's sizing department, including the Catalanos, were Italian.

When Catalano started at Stetson in 1926, the factory, at 3rd and Berks, employed more than 4,000 workers. During the Great Depression, however, the bottom dropped out of the hat making business. By then, Catalano was working at Stylepark, a hat finishing firm located in Center City.

“Things got so bad, lots of times I walked to work at 25th and Locust. I walked so I could save about 8 cents. Things got so slack we had to wait for the mail to come in. The first mail used to be in at 9 o’clock and if the orders came in, we got work. We stood there until 11 o’clock. If no work came in we’d go home. That’s how bad it got to be.” – Antony Catalano, 1982 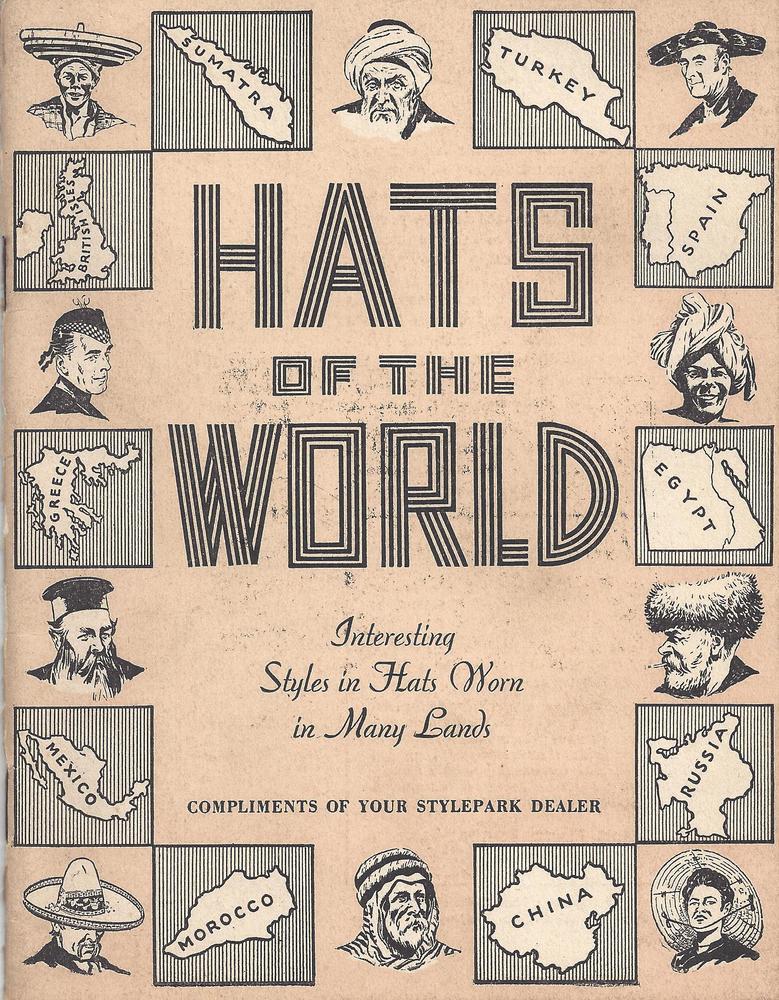 In 1935, Philadelphia's Stylepark Hat Company published “Hats of the World” to promote the wearing of hats, and its own wares, during the Great Depression.

Catalano returned to Stetson, but during the Great Depression fewer and fewer men and women were wearing hats. So Stetson went into decline, and Catalano, like so many other hat makers, sought work elsewhere.

“You made a nice dollar years ago. And then it became seasonal work. That’s why I left Stetson to work for the Government. Because you work two months, get laid off. Work three more months, get laid off. The season got worse and worse. Instead of working nine months a year or ten months a year. As time went by, it got lesser and lesser. It went from twelve months, it went down to ten. Then from ten it went down to seven. From seven it went to six. That’s why I had to get out of it.” – Antony Catalano, 1982

In 1939 Catalano got a job at the Philadelphia Naval Shipyard, where he worked until a heart attack forced him to retire in 1973. Although he lived through trying times and inconsistent work, Antony remained grateful for the country he was raised in.

“God bless America. You'd be surprised how many times I thank the Lord they [his parents] came here, they came to America. They could have went some place else, you know? They made the effort to come here.... It hits me. I love this country. America is America! I don't think there is a place in the world like this country.”
– Antony Catalano, 1982